Shopping Cart
Your Cart is Empty
Quantity:
Subtotal
Taxes
Shipping
Total
There was an error with PayPalClick here to try again

Thank you for your business!You should be receiving an order confirmation from Paypal shortly.Exit Shopping Cart

Review of Fantasy as a Means of Revelation and Justice: Eve L. EwingÃ¢Â€Â™s Electric Arches

Fantasy as a Means of Revelation and Justice: Eve L. Ewing’s Electric Arches

speculative fiction. And while this makes sense– few lit journals are interested in work that’s not

writing discarded out of hand, especially inasmuch as many notable works in the past decade do

dance around the edges of genre work. Karen Russell’s Swamplandia! is a potent example, as is

And this is to say nothing of poetry. Many poets are increasingly comfortable incorporating

elements of genre work into their poems. I think, since poetry is itself so symbolic, it’s a pretty

short intuitive leap to playing with imaginary things to represent a deeper truth, an escape from

the everyday into the desires and realities beneath it. This doesn’t detract from poetry; it

enhances it, offers it the opportunity to grow past its ostensible limits. It’s this willingness to

Arches, so remarkable. Though it’s composed of words, it’s got the visual variety and depth of a

graphic novel, not just because it incorporates images, but because she embraces the exploratory

possibilities of poetry in representing her own memories. In a brief introduction, she writes,

“Anyway, as I rode my bike I would narrate, in my head, all of my adventures…. In this way, my

block became the backdrop of infinite possibility. The space in my head was as real to me as the

dirt beneath my feet.” Throughout the collection, she vividly re-creates this feeling, this sense of

the imagined real as being as deserving of space as the transcribed real. In many poems, she

splits between typed and handwritten text: 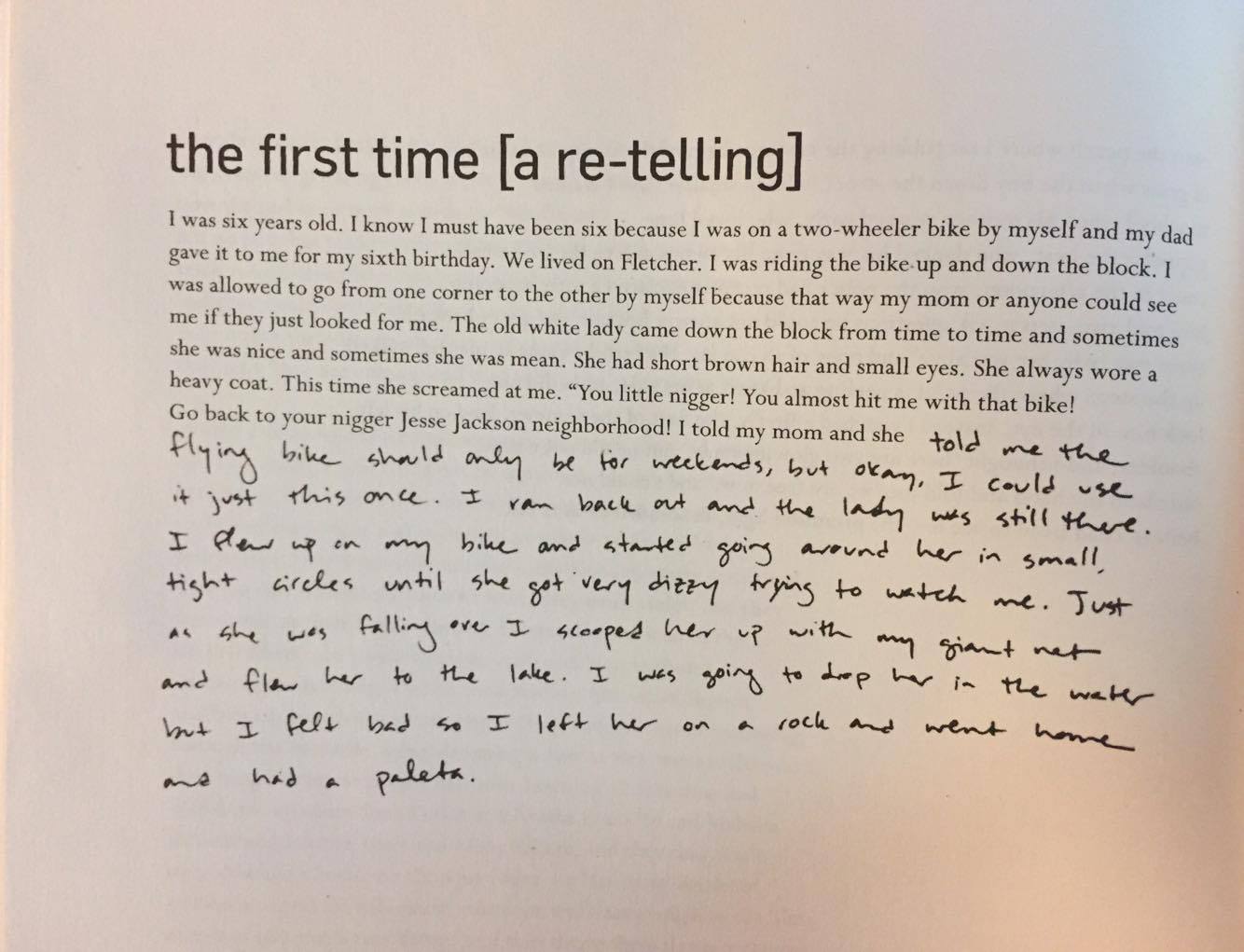 In each of these [a re-telling] poems, Ewing begins with a stark transcription of a memory in type

before finishing the story in her handwriting. Here, she takes the racist cruelty of a neighbor and

responds by using her bike to dizzy the old woman, and captures her in a giant net, hurling her

into a lake. This fantasy isn’t an escape from reality, as is often the charge against the fantastical,

Electric Arches. In a long prose segment, titled “The Device,” she writes the story of a machine

built by a collaboration of a “hive mind of Black nerds, obsessive types, scientists and inventors

but also historians and archeologists and the odd astrologer here and there,” to allow people in

the present to communicate with those in the past, all so that a fifth grade girl can ask this

poignant question: “What words can you offer us to help us be free as black people in a world

that does not love us?” The fantasy offers no out; instead, it gives us back reality, revealed for

what it is. Electric Arches is an essential work for our time, a genre bending book that uses

of racism and the complexity of human interactions. Eve L. Ewing heroically recasts the world to

reveal, right, and write through wrongs.

Oops, you forgot something.

The words you entered did not match the given text. Please try again.